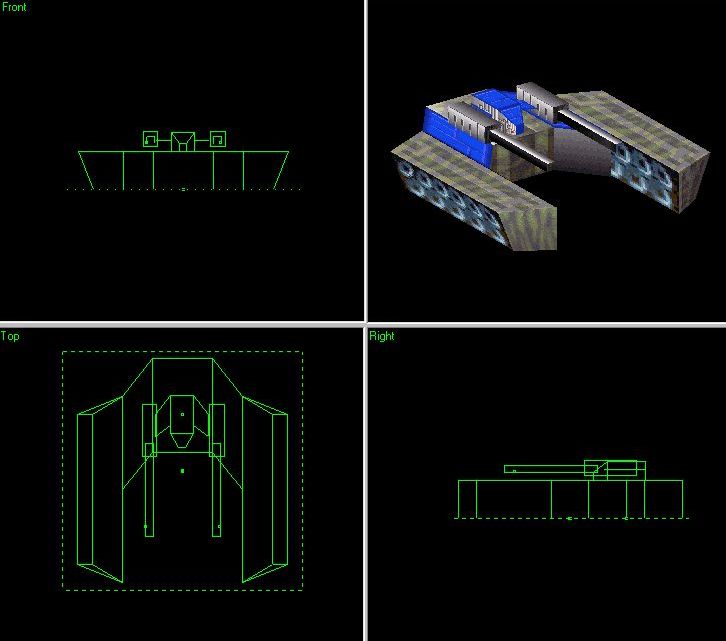 Buildpic: The creator really must of listened to my last review, since the picture is flawless. The background is OTA-like, the angle is one of the most intimidating I\'ve seen in a while, and it gets the point across. Full points.

Model: A lot of care and thought went into this revision, and this model is surprisingly sharp, and OTA like, even though the U-shape is unlike any other OTA unit. A very original and thoughtful design. The turret has been modified to my expectations [4]. The texturing work is top notch, with a distinctive Arm-ish look to the entire unit. I really like how it came along [5]. A much needed improvement was implimented. However, although the corpse texturing has been improved, the corpse's texturing is lacking. I can't put my finger on it, but it feels too dark, too same-textured, and too blue. Diverse a bit, but don't overdue it like last time. [0.5].

Script: Standard Aiming. My appologies about the comments about the flares during the past review; I totally didn't realise that the Flash's model doesn't have flares either. I'm surprised that I didn't notice it at the time. Again, my appologies.

Balance: O......kie. You made me have to relook at the previously 'balanced' unit. There is a saying, and that is 'if it ain't broke, don't fix it.' But now it's broke, and I'm going to dock a point. Anyway, to the review. You decreased the metal costs by 52 units, doubled the energy costs (to about equate them out), increase the armor by 30%, increased the range a snap, increased damage by one point, but slowing down the rate of fire very slightly (which actually lowered the d/s to 54 from 60), which keeps this thing a very effective level one killer (no surprise). However, it takes a huge squad (and a farking fast computer) to take on large targets, making it quite ineffective against most level two targets. I'd say approximately balanced, but the amphibiousness now makes the metal cost feel a little...cheap. Either remove the amphibiousness ability, or adjust the costs accordingly.

My score: OH MY GOD!!! THIS THING IS ALMOST PERFECT!!!

Review by The Legacy | Others by same