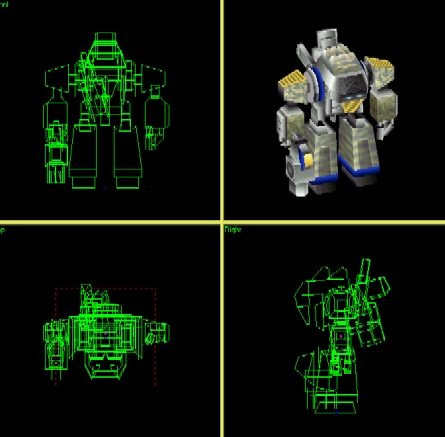 Note: Balance score has been updated due to new details.

Buildpic: The only odd about this picture is the yellow lightsource that gives the unit an orange shade, which it completely lack in the game.

Model: This is one of the most face-ineffective models I've tumbled upon for a long time now. It is of course an old model, I know, but still... The detail ammount and hyped de-sharpening are in fact brutal face crimes that can not be justifyed by the age. Yeh, it looks good on a render, but it ain't designed for optimal in-game performance. But once passing by the brutal face ammounts, you have quite a nice design. It would also be convenient if the size was decreased with 20% since it is a bit to big for it's plant right now.[2]. The texturing is very good, even the CD:3D is present. Maybe one more logo face somewhere on the top (maybe on one of the shoulders) would make it even better... [5]. Then follows one of The coolest corpses I've seen. Impressive to say the least [1].

Script: I really like the way that this guy waves with the arms when walking, but there is something missing in the walking and it doesen't feel like Nova really walks on the ground beneath it for some reason. I can't really put my finger on it, but the ground and the legs aren't moving in the same velocity compared to each other and the fact that this unit more or less lacks knee joints might add up to the fact. The gun-pulling stunt looks good, but also taken directly from the Zeus. Isn't there some other ways a gun might be suspended on the body?

Balance: The trippled metal and doubled energy costs compared to the Arm Shooter (the OTA sniper), this unit is equipped with a three times as powerful weapon and longer range for it as well. It also got almost ten times the armor. Further, the Nova does unlike the Shooter disintegrate obstacles that happen to stand in the way as for example trees or wreckages, unlike the laser of the shooter that can not penetrate anything. So when comparing to the OTA sniper, this unit is horribly overpowered, but let us remember that no one uses the snipers and that might be for a reason. And even though they can cloak (for huge costs), people attention is still cold. This unit is technically underpowered compared to the mobile punishers (Shellshocker and Thor) I have in the review storage and for example the Bertha that for roughly 1000 more metal can shoot so far, you can't even spell to the lenght. This unit is slightly underpowered because while costing as much as five Bulldogs, it lacks a bit in both firepower and armor. Not awfully much, tho.

My score: Well, it might just be me, but I've always imagined snipers as small, agile units that are hard to see. You hear the shot and someone dies, but you can't spot the sniper, isn't that the whole purpose of it? Isn't that why snipers are feared? This unit is everything but a sniper - he is huge, he clomps around on his enormous legs that seem to me made of compressed peewees and he got a big fat gun that fires a huge green ball in relatively slow velocity, ending up with a big bang. He is four times larger (twice as tall and twice as wide in all directions) than the OTA sniper and the mentioned green balls are big as the A.K. torso. If you manage to hide one of those in the woods, you deserve a Nobel prize in innovation. The unit is overall cool, but I won't leave it in my /totala folder... the green blobs are giving me the creeps.