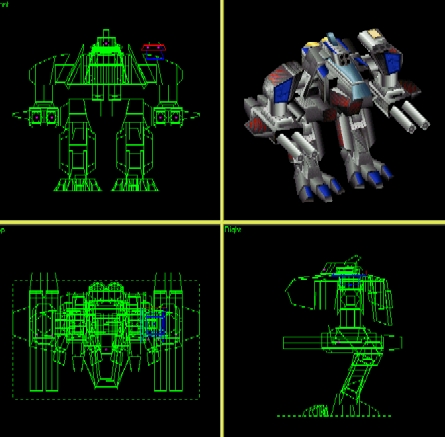 Buildpic: The pattern on the ground could be different and the merging of the unit with the background could be better too (the legs seem to be a bit /off\" in the current pic). Unit 4, Background 2.5, Merging 2.

Model: This unit is one hell of a victim of ineffective design. I would be able to remake the entire model with the half face count and no detail loss. The missile launcher looks too weak for it's burden, as it is smaller than the Samson's, yet punch out about twenty-thirty times as strong missiles. Same thing with the burster cannon that is clearly too small for it's duty. The cannons looks nice. As a rule of thumb, the groundplate is never wider than it is long (don't misunderstand this). There is a reason that all mechs and humanoids have square groundplates [2.5]. The texturing is pretty nice, nothing to really comment over. The CD:3D is present and the toes look nice [5]. The corpse is acceptable, but the 150 faces on the underside are a fat burden [0.5].

Script: The smaller turrets looks a bit odd as they sometimes don't move along the torso. The legs move a snap too fast comparing to the ground. The rest is fine.

Balance: It is extremely difficult to balance these enormous weapons. First of all, this unit costs twice as much as a Krog, but have the same amount of armor, meaning that is can be D-gunned if you are lucky enough. However, the weapon packed in are greatly superior to the Krogoth, who's total d/s ratio is barely enough to cover the primary weapon of the Karg and bear in mind that all weapons got 300 shorter range on average. The Krogs prim weapon is the completely useless gauss cannons in the arms. It isn't even enough to tackle a lesser Flash swarm. The Karg, on the other hand got no useless weapon and the short-range burst gun is actually extremely effective against incoming masses of units, destroying them faster than the plague. Still, it's slightly underpowered because what we have learned from TA is that the higher costs a unit got, the more effective must it be. This unit is an equal brother of the Krogoth (Karg == 2 Krog) but is should not be. Also bear in mind that the Karganeth's factory is much more expensive than the Krog Gantry and that the commander's nanolathing rate is completely nothing compared to it (meaning that setting 200 Adv. Con. Planes on the job won't help especially much). Too weak is the final conclusion.

My score: Damn it... Damn, damn, damn it... I don't want to like this unit. It is against my principles. Also note that you need the adv. kbot gantry (or what it's called). I don't have any link atm, but I'll host it up later if I remember it.