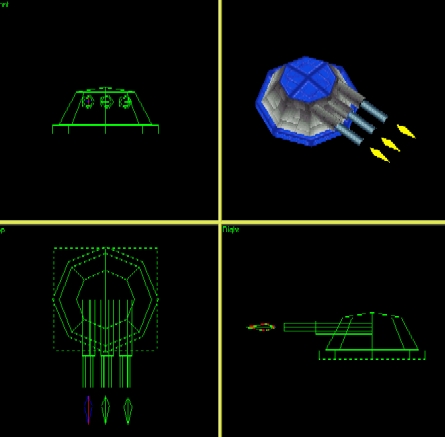 Buildpic: Very short: Unit looks good and so does the background. There is nothing wrong with the merging, thankyouverymuch. Impressively nice buildpic.

Model: This is not in any way a highly evolved modelling art. Rather something antique... I've always said "Simple is beautiful" but this seem to lack something. A bit more details would not be considered wrong. I mean, this model looks just boring, there is no hidden beauty anywhere. You should add some kind of face formation either on the top or on the opposite side of the barrels or have more entertaining texturing. Other weird thing is that all the barrels have 6 faces and that is just a waste because it's enough with three for each one. Otherwise, the face count is kept on a acceptable level. A very small bug is that your flares only have three faces: two up and one to the right (by using a bit logic many people can discover by their own that there is no face to the left). A redesign is also needed for the sleeves that currently pop up right from another metal spot and moves through metal like butter when aiming. Consider using the hat-on-the-base design from the Punisher or the Guardian where the barrels are in the empty space between the hat and body. The model score is 2 because of the boring design. The texturing could be much better than containing just four different textures. The sides are turned wrong because unit tends to be darker the closer to the ground they get, not the opposite and the logo texture close to the ground should also be the dark [2]. Back to the drawing board with the wreckage. Hey, the model has actually been not just turned and twisted as for other models, but once for all actually deforming. What I dislike is that the whole creation is textured in one texture only and since I gave zero for that to four units this far, you will not get away either.

Balance: For 500 extra metal, this unit have a bit more than 50% more armor, slightly longer range and 50% more powerful weapon than a Punisher. After that statement many would think that I would rate this unit as unbalanced, and I would have if there were both lvl2 fortifications, but since you got to first build an advanced plant and then an advanced construction unit, the stats gets rather equal. The higher level weapons are either made to have longer range or having more bang per buck and this actually got a bit of both to invite people to build it. Although you should consider increasing the price with about 100 metal and the proportional amount energy, I find this unit good balanced.

My score: I hate the Ambusher because it got shorter range than a Pun and therefore useless in my eyes even though it can take a major beating when folded in. This is just a unit I've searched for to build by my adv. units when not pumping fusions and berthas. Just a pity that the model is sucky...