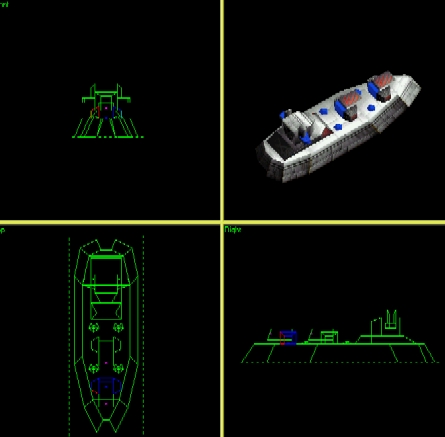 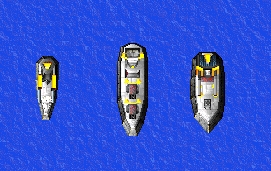 Model: As you see on the in-game shot, this model does perfectly merge into the OTA schematics for Core ships, both in model and in texturing. There is only one minor flaw... The "turret" or rather the bridge section in this design should certainly be a snap darker. It is also possible that a centered, triangular shaped logo mark - like on it's brothers - would do good besides the current ones. What I see throughout this entire model is that a perfectionist has been at work (or someone that really desires high scores on this site and knows how I think). None of the details contradict the original ships in TA, yet it's not alike them, creating a new "look". No useless faces can be detected on the ship, nor the corpse and the latter being properly textured as well, which is rare nowadays. Purity and perfection beams out from this unit and up in the sky where the Central Consciousness dwells on a metal planet out there somewhere... Model - 4, Texturing - 4.5, Corpse - 1.

Script: The firing script works perfectly and doesn't look odd at all, even when firing straight through each other.

Balance: The statistics are more or less clawed off the Vanguard (and it's high score), but this is a counterpart after all and counterparts in the OTA world means just another model and slightly different stats. Compared to the Vanguard, this unit costs a bit less, got less maneuverability and speed, but more armor (and it does two more damage units per second). This is a ship-to-ship warrior that is lethal to any non-submerged enemies within the relatively short range but is useless against most other things.

My score: This... is... No, I can't explain it for I lack proper words. This is the best thing happening to me (as a reviewer) since uh... Vanguard. Really, if you haven't already downloaded this unit, press the download link until you have for this is a real jewel. A new strategic addition has been brought to us in a very brilliant form so hurry up and get it now.